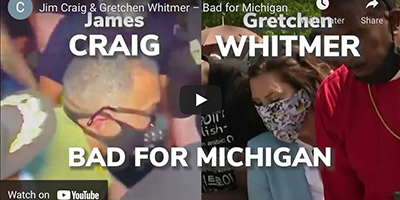 It’s an opening salvo in what could become a contentious Republican primary election.

“Jim Craig bragged this week that he is the candidate to beat,” said Brown, a captain with the Michigan State Police and frequent critic of Craig. “I take that as a challenge. I’ll put my 34 years of leadership experience, my military service, my elective office experience, my energy, and my positions on the issues, against his any day of the week.”

Brown’s ad focuses on Craig and Whitmer kneeling with radical Black Lives Matter activists at a time when BLM radicals were chanting anti-police slogans like “Pigs in a blanket, fry ‘em like bacon” and “What do we want? Dead cops!”

This isn’t the first dust up between Brown and Craig. Earlier this year, Michael Brown issued a blistering response to a fundraising letter sent by Craig that called Michigan State Police officers “weak kneed.”

In the letter, Craig complained that his campaign announcement was overrun by protestors and he blamed Whitmer implying that she ordered state troopers to stand down.

“…we should have anticipated the weak-kneed response from Whitmer’s state troopers,” Craig said in the letter.

“It shows how out of touch Jim Craig is,” Brown added. “The Michigan State Police is not the police force of the Governor. They are not ‘Governor Whitmer’s state troopers.’”

“Craig would be a terrible nominee for Republicans,” Brown continued. “He’s knelt with BLM radicals, disparaged the State Police on television, and called police officers ‘weak kneed.’ Then he wouldn’t even take responsibility for his actions. He blamed his campaign manager. We need leadership in the Governor’s office, not buck-passing.”

“Denigrating the men and women in law enforcement to score political points is wrong,” Brown continued. “Kneeling with BLM radicals is wrong. That’s the type of disdain he is showing Michigan.”