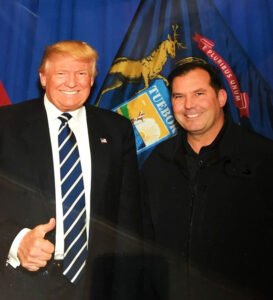 Mike Brown is a Marine and has served 33 years in the Michigan State Police, where he has put all his chips on the table as the current Commander of the Southwest Michigan region and is standing up to Whitmer directly. That takes guts and risk taking. That’s what it will take to win this race! He is a candidate that relates to all of Michigan from the country to the cities and the suburbs in between.